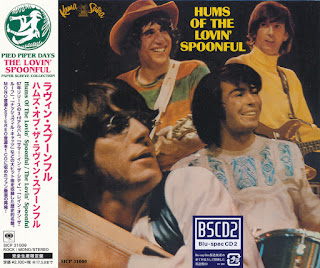 Writing about The Lovin' Spoonful can drive a guy nuts. As you dig into the group's music, the lingering questions become increasingly perplexing:  Why have they never received their due as musicians? Why was their role as the earliest innovators of "country-rock" music swept under the rug?

Why don't their terrific albums top the lists of the best records of the 1960s? Maybe it was because they appeared to be having way too much fun.  Their "Good Time Music" branding, teenybopper appeal and singles band image gave the group its share of identity problems.  And until recently, their catalog was largely unavailable. But still...

The Spoonful was one of the best bands in the land in a golden age of pop music. Bassist Steve Boone and drummer Joe Butler formed a rocking,  lilting rhythm section. John Sebastian, ranked highly among the era's best songwriters, sang lead, played rhythm guitar, harmonica and autoharp, underscoring the folk leanings of the group. Zal Yanovsky, an uncommonly original guitarist, was their secret weapon.

On his electric Thunderbird he conjured Floyd Cramer piano slip notes, pedal steel licks, French horn sounds and unbridled rock'n'roll mayhem. Instead of wearing their musicianship on their sleeves, The Lovin' Spoonful were unshakably unpretentious and exuded an air of impossible coolness.

The record that could and should have earned the Spoonful their rightful place on the short list of exalted rock royalty is Hums Of The Lovin' Spoonful, considered by many to be their best album.  Like their first two long-players, it glistens with chart-toppers and vital tracks.

Amazingly, it was crafted in catch-as-catch-can sessions, in the throes of constant touring, at a time when the fabric of the band began to unravel in the aftermath of a demoralizing drug bust. While the high standard established on their earliest recordings left scant room for quantum artistic leaps between releases, Hums marks a refinement of the band's immediately identifiable groove. Their folk, blues, country and jug band roots meet an intensified focus on production value and experimentation to yield a fabulous sounding record.

It's also their first LP comprised fully of original compositions. Along with Revolver, Pet Sounds, Face To Face and dozens others, Hums Of The Levin' Spoonful is one of the great mindblasts of the pre-flower era. With a dearth of feedback, deep introspection or acid-tinged twinges, The Spoonful staked a turf wholly their own in the pop landscape. Notwithstanding a few cuts that pack the wallop of the clobber of an old comfortable shoe, the acoustic-driven Hums virtually kills the listener with kindness. Hums Of The Lovin' Spoonful, titled as a reference to Winnie The Pooh, was released on the MGM subsidiary Kama Sutra in late 1966, in time for the year's Christmas market.

The band had been on a mind-numbing roll, commercially and creatively, since the release of their first single "Do You Believe In Magic" in the summer of 1965.  The promise evidenced on their debut album (bearing the same title as their first 45} blossomed on the Top Ten Daydream, their second LP, in the spring of '66, and a potential career-crushing sophomore slump was avoided.

Later that year they were tapped to score Woody Allen's spy-spoof flick What's Up, Tiger Lily?  By January of '67, their streak of consecutive Top Ten singles would number seven.  Three of them, including the Number One smash "Summer In the City," formed the core of Hums. The control room team for Hums was Erik Jacobsen, the band's producer beginning with "Magic," and Daydream engineer Roy Halee,  noted for his work with Simon & Garfunkel and Bob Dylan. While many of the sessions were held at Columbia's 7tn Avenue facility and Bell Sound in midtown NYC, some recording was done on the West Coast. Hums kicks off with a tune conceived and committed to tape in L.A.

"Lovin' You" stemmed from John and Zally's riffing on a Mississippi John Hurt feel.  The old-timey shuffle steps into the '60s pop realm with an electric 12-string guitar and the Hohner tubon (or "Phabulous Phallon," as Zal dubbed it),  an inexpensive, cylindrical keyboard instrument.  Bobby Darin covered the song during his folk-rock period and enjoyed a Top 40 hit in early '67.

Musically, the blueprint for "Best Friends" is Ma Rainey and the bedrock of the track sports John's antique harmonium. The '20s authenticity is rendered by a vintage trap kit with a 30 inch bass drum and sock cymbal, banjo, and Steve's upright bass.

More than a year after Hums hit the streets, tongues were wagging about Dylan's John Wesley Harding leading the pack "back to the roots. " These guys had already been there, done that, and then some. After all is said and done, the "whys" and "firsts" are interesting and all,  but who really gives a darn? The music is all that matters. The Spoonful had the goods. They played "clean as country water" and "wild as mountain dew." The great news is that Hums Of The Lovin' Spoonful is back off the shelf. Strike the harp and join the chorus!
by Dennis Diken January 2003 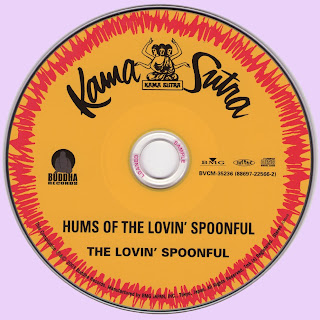 A wonderful album, thanks!

hi..
great blog and great post..i love summer in the city, about lovin' spoonful i love also jerry yester that replaced Yanovsky in the band and with his wife judy henske published a wonderful lp "farewell aldebaran" in 1969.
keep on with your wonderful blog, thanks
Greetings from Italy

Thank you for this good album.

This article is Way over due about a band that deserves much more credit in alt-country rock circles....Well written article!

Thanks a lot for your magnificent uploads!