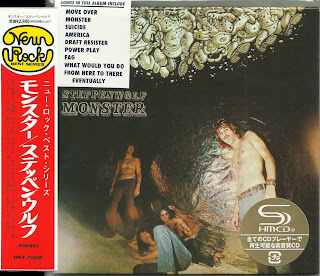 Steppenwolf may be best remembered for its pair of ubiquitous hits, but the band had far more to say than that. John Kay and his bandmates too often gave in to their polemics, trapping some of their lyrics in the late '60s and early '70s; while nuance was never their strong point, they still knew how to make an artful point. On 1970's Monster, an overlooked masterpiece, they managed to create a thematically cohesive album that managed to remain concise even while containing the group's most epic moment.

That epic piece, "Monster/Suicide/America" opens the album with a nine-minute history of the American debacle. Steppenwolf eviscerates the US, criticizing easy targets like slavery, invasive policing, and unjust war, but the group complicates the matter. Kay reifies America and the ideals of the country, establishing her (yes, it's a "she") as an entity pre-existing and continuing outside of the thoughts and actions of the populous, capable of rescuing her "sons and daughters." At the same time, they create a monster that's risen up from the actions of the citizenry, but not only from government atrocities, but also from ordinary people who "got fat and grew lazy." Alternating between second and third person point-of-view, Kay targets everyone, in the process discovering that between the evils of the monster and the good of the mythic America lies the suicide—the very drive for freedom is a death drive based on narcissism and corruption.

The real genius of the song lies in its musical structure. Steppenwolf slowly develops increasing tension through tempo changes and heavy riffs that periodically gives way to false releases. After more than five minutes, the song finally breaks into what could have been a serviceable chorus. The music lightens and a set of backing vocals come in to suggest hope and openness, but the lyrics are unrelenting and the music's pulled between darkness and light (a second attempt at the apostrophe to America) before dying out. The performance needs a magnificent sense of pacing, atmosphere, and restraint, and Steppenwolf delivers (the edited versions that show up, as on Move Over are more digestible but wreck the structure).

Of course, we don't come to Steppenwolf for artistic masterpieces, and they wisely follow "Monster" with "Draft Resister," a murky groove driven by a double hit on the tom. The lyrics are straightforward, but they're useful in making explicit the themes of the album: the inherent failure of hierarchy to maintain reliable leaders. Anyone who attains a seat of power (or finds himself in it) can't behave. In this track, the target's obvious, as we're asked to "heed the threat and awesome power of the mighty Pentagon," but as the album develops, the targets become blurrier, and it's hard not to feel implicated.

"Power Play" has one of rock's greatest forgotten openings, as one simple guitar part grows into three, each toying with the hook preceding it until the band establishes a fantastic groove. Ostensibly, Kay snipes at vague Authority, but in doing so he reveals humanity's tendency to forego patience in favor of opportunism. Starting with the "hey, you!" at the end of the first line, Kay turns his questioning into a threat, once opening enough to say we "just might all gang up on you." Even so, he can't resist the optimism in democracy; the power play here is dependent upon the people—the masses—actually holding the power, to be able to find their leaders "obsolete" and get rid of them. It's the same hope that barely survives "Monster," but here it's close to turning into bitter revenge; Kay acknowledges not a class or political struggle, but a "never ending power play / 'Tween jealous greed and vicious hate."

After "Fag," an instrumental more combative in name than in performance, and the direct questioning of "What Would You Do (If I Did That to You)," we get one of the band's finest recorded moments. On a big bass drum, "From Here to There Eventually" savages institutionalized Christianity (echoing "Monster"'s "Like good Christians some would burn the witches") from the perspective of a flinching apostate. Nearly every line—or at least slant-rhymed AAAB stanza—makes for an epigram, yet Kay still manages to convey the hurt that narrator feels at his religious betrayal. For all the anger of opening lines "You filled this house with things of gold / While handing crumbs to the old and poor," the singer needs help in saving the world ("Don't ya know we need somebody to / Do some work down in the street").

When authority—in this case the clergy—fails and the followers recognize the perils of leadership, a void opens. Kay's objective in the song is as much to resolve this dilemma as it is to excoriate Christianity. He knows "we got to go from here to there eventually," but he can pin down where either of those points are. Those in power have faltered in such a way that reconciliation feels impossible. The final verse deals with religion's invasion of privacy: "It's got nothing to do with heaven or hell / What I do in bed, I'm not gonna tell." By this point open conversation is impossible and Kay can only snidely suggest, "You really ought to try it."

After the breaches over treatment of the poor and sexual proclivities become too great, the backup singers (returning from "Monster") turn into virtual gospel choir. It's impossible to know how satirically to take this coda. The lyrical content suggests the lines can only be parody. How else could we see a rejection of the church lead into "Hallelujah! Jesus will save you ... He's coming back, and you better believe it"? But the pain and empathy in the song (along with a zealot's lead guitar plea) point to a real need for healing. In the near chaos of imitation gospel, there's the light of a real spiritual yearning, but the power figures and followers of "Monster/Suicide/America" have revealed the impossibility of effective authority, and there's no way out. As the singers wail about salvation and a whip cracks on moaning bodies, looking upwards becomes both necessary and futile, and we have no idea what to believe.
by Justin Cober-Lake 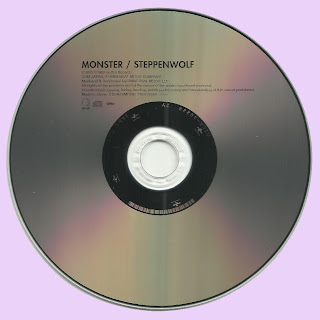 Free Text
the Free Text
Posted by Marios at 1:48 AM

Thanks Marios, for this beautiful gem of classic rock, I bought it about 40 years ago. And since then I've get every new version of it.
It's not the best of Steppenwolf, but personally I consider it as the best, due to its political message. I still feel involved with it.
Thanks and congratulations for your work

Both 'America' & 'Draft Resister' still bring chills. I have always appreciated the way Steppenwolf could 'party' enough to grab and keep the attention of fans so that they could hear the political messages Kay & Co. were making. Many thanks for this.