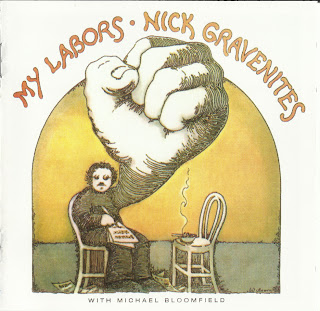 Singer and songwriter, bandleader and producer, raconteur and poet of the blues; Nick Gravenites is one of those seminal sixties figures whose contributions to American music cannot be measured solely by his discography. Although often overshadowed by such famous friends as Janis Joplin and Michael Bloomfield, Gravenites' 40 year career links the folk revival of the fifties with the Chicago blues scene of the early sixties and the post- 1965 West Coast psychedelic rock explosion.

He has worked with the Paul Butterfield Blues Band, Janis Joplin and Big Brother and The Holding Company, Mike Bloomfield and the Electric Flag, and John Cipolina and Quicksilver Messenger Service. He has written songs and produced records for a host of Chicago blues legends including Otis Rush, Muddy Waters, Howlin' Wolf, James Cotton and Buddy Guy. But My Labors is the only Nick Gravenites solo album ever issued by a major label (in 1969, as US Columbia 9899).

To quote one of his best-known songs, Nick Gravenites was "Born In Chicago" in 1938. The son of Greek-American immigrants, he grew up in the city's Brighton Park section, where his father George was a candy maker. Nick described his childhood in this ethnic "white ghetto" in a fascinating memoir of his early years, first published in Blues Revue (1995-96). In addition to the pop tunes on the radio, he heard records of Greek string bands and - after the death of George Gravenites in 1949 - listened to his mother "sing and cry her pain in the sad, melismatic style we Greeks call metaloyia... music I will never forget."

By early 1967, Gravenites had relocated to the Bay Area and become a vital participant in the burgeoning San Francisco scene. With Mike Bloomfield and Barry Goldberg, he co-founded a new horn-powered band called the Electric Flag. Which made its stage debut in June '67 at the Monterey Pop Festival. With Buddy Miles on drums and Harvey Brooks on bass, this group - although never effectively captured on record - was for a too brief time one of the most exciting and accomplished stage bands in American rock. As the Flag's front man, Gravenites conveyed a tough, bluecollar charisma.

A mostly-live a l b u m . My Labors had its genesis in the studio, and three songs from those sessions were included on the original LP. But in January and February 1969, Nick Gravenites participated in a series of live recordings at the Fillmore West in San Francisco, portions of which were issued the following October as Live At Bill Graham's Fillmore West.
by Andy Schwartz, April 2001 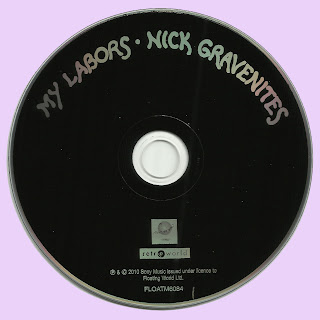 Free Text
the Free Text
Posted by Marios at 12:10 PM

Glad to hear from fans of this tile pattern!
Stone Split Face

Listening to the cd now. It’s better than I remember it.