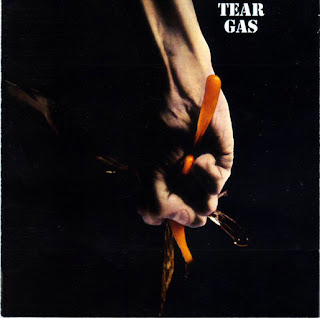 The Glasgow-based prog/heavy/rockers Tear Gas (originally known as Mustard) released their second album in 1971 establishing themselves on the underground scene.

Wullie Monro and Eddie Campbell left the band. Wullie joined Berserk Crocodiles (see Dream Police) and Ted McKenna from the freshly collapsed Dream Police replaced him. Eddie Campbell quit for whatever reason - perhaps just tired of touring - and was not instantly replaced. 'Tear Gas' released on the Regal Zonaphone label by this revised line up though Campbell appears on the 'live in the studio' medley of 'All Shook Up & Jailhouse Rock'.

An un-credited Ronnie Leahy provides the keyboards elsewhere on the album. Leahy played with Glen, McKenna and Cleminson again in the early '90s under the name of the 'Sensational Party Boys' - promoters mistook the name for a group of male strippers! ' Saw them in London in the Charing Cross Road Marquee (now a Weatherspoons) - a right good night..

Tear Gas' has an odd front cover pic. Is it meant to signify anything? If so it was lost on us. All tracks are 'hard 'n heavy rock' . Again not terribly memorable apart from 'Love Story', a highlight of the stage act, whose arrangement was visited again by SAHB on the 'Penthouse Tapes'. One is left with the feeling that the band was a couple of years behind the times in their material and the union with Alex Harvey was the shot in the arm of originality they needed. 'Tear Gas' was reissued on CD by Renaissance, a US label, in the mid '90s as RCD1005.

After the comercial failure of the 'Tear Gas' LP, Ted McKenna's cousin, Hugh McKenna, was drafted in on keyboards and backing vocals but Davie Batchelor soon left to go into production - he produced the SAHB stuff  - they all sound pretty good - but was famously dropped by Noel Gallagher during the making of Oasis' first album.

A rumour persisted for a while that he had to quit Tear Gas because he was going deaf! Hugh took over the lead vocals and this is the line-up that returned to Glasgow to join up with Alex Harvey after an unsuccessful stint in London . The rest of that story is well-documented history.
The Rocking-Scots 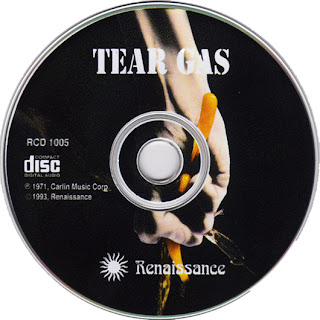