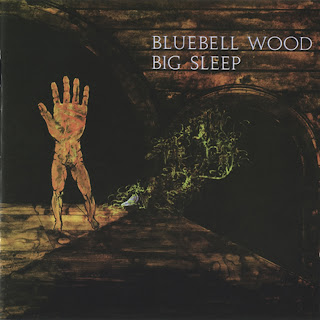 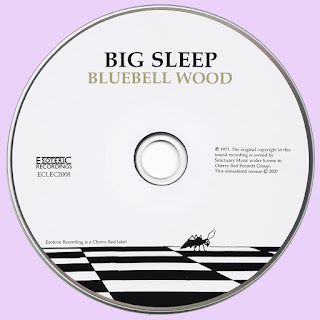 One of my favorite bands I have this already several years
Personel: Ritchie Francis (śpiew, fortepian); Ray Taff Williams (gitara), Phil Ryan (instr. klawiszowe), John Weathers (perkusja).
Even in a time of feverish experimentation, the group had an incredibly unique hybrid sound that seamlessly stitched together pop elements, classical, R&B and blues, psychedelia and rock with incredibly tight and egalitarian arrangements. That latter was important, as every bandmember was a virtuoso, and thus each deserved the space to shine. Unusually, the group boasted two keyboardists, but forget comparisons to the likes of ELP, as Big Sleep's numbers often counterpointed lavish organ passages with R&B styled piano or electric keyboard, underpinning their numbers with a jazzy or bluesy aura. Acoustic guitars further enhanced the rich atmospheres, and usually followed the organ's lead. The electric guitars arrived well into the pieces, a further musical counterpoint that accentuated psychedelic organ passages or pulled the numbers into rock. Although there's an improvisational feel to it all, the songs are, in fact, very tightly structured, including the fiery guitar solos that wind around the keyboards. The band's pop sensibilities are evident too, especially on the catchy chorus of "Aunty James," passages within "Death of a Hope," and particularly on the clap along R&B of "When the Sun Was Out."
However, it was the epic eleven-plus-minute title track that sent prog rock fans wild, a showcase of Big Sleep's many styles and talents. Filled with the kind of dynamics that any modern emo band would die for, quiet passages give way to grand up-tempo segments, downbeat blues shift into raging psychedelia, and strings pile onto ballads before the band breaks into rock and the splendid vocals fill the air: Bluebell Wood had it all. Yet the album still failed to excite the masses. The band never even took the stage under their Big Sleep name, and folded soon after the set's release. So much talent would eventually find homes elsewhere (notably with Gentle Giant and Man), but it's no wonder the album has been long sought after by collectors. 2007 digitally remastered reissue of this Welsh band's only album, originally released in 1971. The band members (formerly with Eyes Of Blue) would all soon head for greater things in bands such as Gentle Giant, Man and Wild Turkey (formed by ex-Jethro Tull bassist Glenn Cornick) and Rick Wakeman's band. An album that features many fine songs and styles, Bluebell Wood has been sought after by collectors for many years thanks to its influence and place in the history of British Progressive Rock and in the annals of Welsh rock. Remastered from the original master tapes, Bluebell Wood has never sounded so good. Eight tracks. Esoteric.

Neither their 1968 debut Crossroads of Time nor their proggier, Quincy Jones produced follow-up In Fields of Ardath brought the commercial success Eyes of Blue so sought. Although the Welsh quintet were losing hope, their label head and manager Lou Reizener wasn't throwing in the towel yet. In his view, only a new moniker stood in the way of stardom; thus Eyes were renamed Big Sleep and set to work on their third and final album, 1971's Bluebell Wood.
@ Marios.... Thanks a lot for reviving this beauty
Cordial Greetings from Polish
Adam

Another day, another killer album. Many thanks Marios.

I really enjoyed this, thanks Marios!

A pleasant surprise. Thank you Marios

New to me, can't wait to check this out, thanks Marios!

Thanks for sharing. Great that links (at least 2 mirrors) are still alive! Flogger's original distribution in e-mule don't seem to have any seeds at the moment.
For those who may be interested in the Eyes of Blue albums; antonyart in Avaxhome recently posted new Flawed Gems editions of both albums in his blog. Great stuff...

Marios: when you have time, if you can a re-up, you do me happy. Thanks!